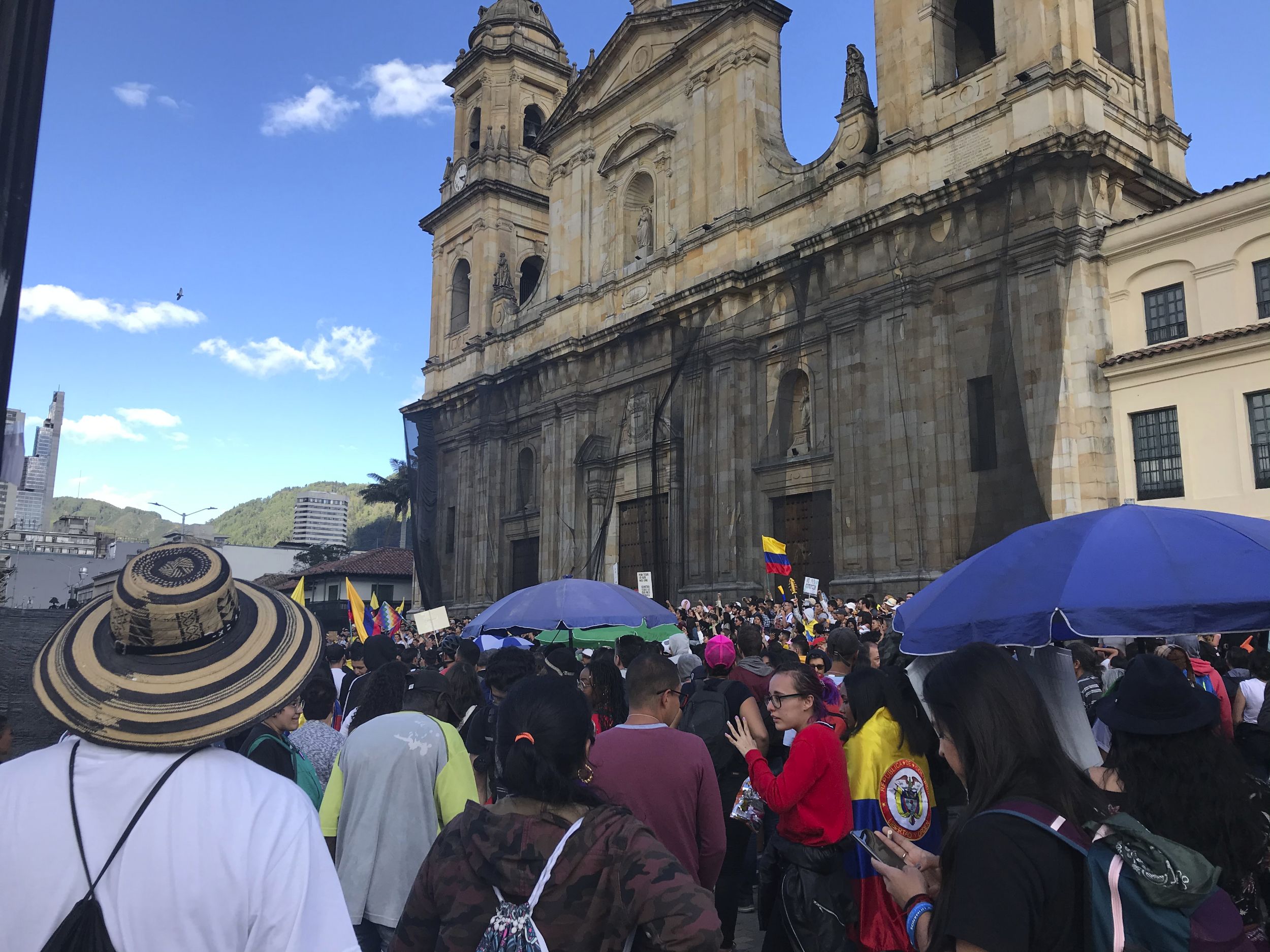 Colombia has long been heralded as one of the oldest and most durable democracies in Latin America, with only one short period of military dictatorship in the twentieth century.  Yet Colombia’s reputation as Latin America’s oldest constitutional democracy is complicated.  In the last decades, Bogotá regularly limited freedom of assembly, association, movement and expression.  Popular protest movements were treated by successive governments as threats to national security long before the advent of the Cold War, and long since its conclusion.  Indeed, the criminalization of protest has been a matter of public policy in Colombia since the early twentieth century.  State of siege legislation made possible by Article 121 of the 1886 Constitution was used by national governments to suppress dock, oil, transportation and banana worker strikes through the 1920s.[1]  Leftists parties were often banned outright, and workers’ organizations denied the right to collective bargaining.  In the 1940s, as the country descended into civil war, sweeping measures were taken by the central government to quell popular protest.  When Colombia’s guerrilla conflict began in the 1960s, the militarization of the countryside deepened.  Through the end of the Cold War, as many other Latin American countries transitioned to formal democracy, Colombia enacted promising reforms in the area of human rights, passing a new constitution considered one of the most progressive in the region.  Yet simultaneous to this period of advancement the country descended into a terrible maelstrom of violence.  Recent questions about Colombian democracy have thus been raised by social leaders in the face of great contradictions.

This history of violence and the criminalization or protest in Colombia can be divided into the following major periods.

Briefly, the mid-century conflagration known as La Violencia, which began in the late 1940s, concluded in 1958 with the creation of a power-sharing agreement between the Liberal and Conservative parties known as the National Front that effectively blocked third party movements from meaningful participation in politics.  While violent incidents between members and allies of the Liberal and Conservative parties had erupted through the mid 1940s, fighting only engulfed the whole of the national territory after the killing of Liberal presidential candidate Jorge Eliécer Gaitán on April 9, 1948 in Bogotá, and a series of urban uprisings that were organized in response.  A national state of siege was declared by President Mariano Ospina on May 31, 1948, that lasted for a decade.

The period between 1958 and 1991 was characterized by a expansion and consolidation of guerrilla presence across the national territory, and the emergence of paramilitary groups that fight alongside state security forces.  At times, emergency measures directly impacted politics, as was the case during the presidential election on April 19, 1970.  Vote counting was interrupted on election night when the government in power declared a state of siege to control opposition supporters, leading to accusations of electoral fraud.  Over the next year, the national government would use the army to crush national student protests, and an oil workers’ strike that shut down the country’s refining and distribution.  In response, a group of activists established Colombia’s first human rights organization, the Committee for Solidarity with Political Prisoners or CSPP.  Between 1970 and 1991 Colombians lived under state of siege conditions for 17 years, or more than 80 per cent of the total time.  The apogee of criminalization took place in 1978 with the establishment of the National Security Doctrine by Liberal president Julio César Turbay Ayala.  Over the following years, modest steps would be taken by the Colombian government towards democratization, including peace talks with three different guerrilla organizations.  Tragically, the creation of a political movement associated with the FARC produced a furious backlash, and thousands of members and associates of the new Patriotic Union were killed over the next decade.  In 1988 an Anti-Terrorism Statute was signed into law that typified terrorism as a crime for the first time in Colombian history, and allowed for the legal prosecution of anyone found guilty of upsetting “public order”. By the end of the decade, more formal steps were taken, including a Supreme Court decision to end the practice of trying civilians accused of crimes against the state in military courts.  A new constitution was created in 1991 through a participatory process that established stricter guidelines for the use of emergency legal measures.[2]  Notwithstanding this apparent progress, Colombia then descended into a period of more and more intense conflict, during which time non-state armed groups massively expanded their influence.

During the tumultuous period from 1991 to 2002 illegal armed groups massively expanded their influence across Colombia.  Despite progress in terms of Civil society actors accused of sympathizing with left and progressive causes were frequently targeted by military and police units during what would be the most violent decade of the Colombian conflict.  As has been observed, at this stage, Colombia jumped from a “culture of exception” to a “culture of dirty war”.[3]  At the end of this period the Colombian government adopted an overtly military approach to fighting the guerrillas and the legal left, often openly conflating the two.[4]  Government statistics show that more than 1,000 massacres were committed in Colombia between 1997 and 2002 alone, around 70 per cent of which were attributable to the AUC and other paramilitaries, including joint operations with the military.[5]  The $1.3 billion USD aid package known as Plan Colombia was approved by the US Congress in 1999, which emboldened security forces to carry out offensive actions within regions of guerrilla influence.  This had the impact of increasing pressure not just on insurgents per se, but more generally on civilians living in so-called “red zones”.  In an October 1999 publication Human Rights Watch described the conflict as a “War Without Quarter”, for the ruthlessness with which civilian populations were attacked.  As we shall now see, this extreme violence coincided with multiple efforts by the state to demobilize paramilitary and guerrilla groups.

A new period of repression of civil and political rights began in 2002.  This period coincides with the presidency of Álvaro Uribe Vélez (2002-2010), a controversial hardline former governor of Antioquia who would campaign on a promise to defeat the Colombia guerrillas militarily.  Early in his first term Uribe Vélez proposed a new Anti-Terrorism Statute, meant to empower the military to carry out broad internal policing measures. While it was defeated by the Constitutional Court in 2003, this proposed law set a belligerent tone between the government and its critics for the following years.  Despite the official demobilization of tens of thousands of paramilitary troops under the terms of the Justice and Peace Law, or Law 975, of 2005, illegal armed groups associated with the political right flourished.[6]  This led to the official demobilization of the United Self-Defense Forces of Colombia, or AUC, a process that was plagued by accusation of legal irregularities.  Paramilitary leaders and fighters handed in their weapons and exchanged sworn testimony for reduced or suspended sentences.  During this period of time, Álvaro Uribe spoke frequently of his contempt for human rights defenders.  The president openly accused human rights advocates of being leftist terrorists, severely undermining the safety of thousands of vulnerable individuals and hundreds of national and local organizations.  In his second term the president characterized himself as a soldier in business attire, prompting leading anthropologist María Clemencia Ramírez to observe “a façade of civilian government masks an increasingly militarized state”.[7]  Government officials equated counternarcotics and counterinsurgency with the repression of social and opposition movements, with disastrous short- and long-term impacts on large swaths of Colombian society.  Notably, peasant growers of coca leaf, the main ingredient in cocaine production, found themselves caught between state-led eradication efforts, including aerial fumigation and mass arrests, and illegal armed groups on the left and right competing for influence over the lucrative trade.  Despite the large sums spent on the War on Drugs, coca cultivation expanded during this period.  Meanwhile, the stigmatization of mestizo, African descendant and Indigenous populations across the country deepened, presaging the current post-Peace Accord wave of repression of rural social leaders.  In 2009, Margaret Sekaggya, UN Special Rapporteur on the situation of human rights defenders, visited Colombia, where she observed that government officials systematically stigmatized and denigrated activists.[8]  The government approach branded as “democratic security” represented in many ways an extension of prior government policies.

In 2010 Juan Manuel Santos was elected president of Colombia with a promise to try and end the country’s long internal armed conflict.  In 2011 Colombia passed a Citizen Security Law that covered a very wide range of activities, including drug trafficking, terrorism, and civil disobedience.  This legislation would be used to legalize police action against street protests and general strikes over the next few years.  Simultaneously, the government introduced legislation aimed at the redistribution of lands to the victims of displacement and dispossession. By 2012 official negotiations were taking place between the government and FARC guerrillas in Havana, Cuba.  The negotiations opened political space for peasant and other popular movements, which in turn produced a kind of revitalization of Colombian civil society.  Notwithstanding activist gains in terms of building new social processes engaged with the cause of peace, engagement entailed serious risks.  African-Colombian and Indigenous groups fought hard to include issues pertaining to historic and systematic colonialism and racism recognized by the negotiating parties, and the final chapter of the final agreement on ethnic recognition and rights was only included on the very last day.  Organizations’ challenge to the process would become a major problem going forward, as many ethnic leaders have been targeted since.

The criminalization of protest in Colombia has continued despite the signing of a peace agreement and subsequent demobilization of the guerrillas in 2016.  The dynamics of inequality and marginalization that were sources of conflict in the first place remain unresolved, not least because of the persistence of paramilitary violence.  The peace accord addresses stigmatization, exclusion and the weakness of judicial institutions in multiple ways.  Notably, the peace accords established mechanisms to address victims’ rights to truth, justice, reparation and non-repetition.  While millions of Colombians voted to support the peace process, the process was deeply polarizing.  In ethnic territories Colombians of African and Indigenous descent mobilized to defend their right to participate in peacebuilding, leading to watershed civic protests in Buenaventura in 2017 and at the national level in 2019.  These protests resulted in agreements being signed by the central government, thus far only partially implemented.   At the same time, dozens of denunciations were made by participants of police abuse and unlawful detention, as well as threats against leaders.  Since 2016 hundreds of social leaders have been killed in Colombia, many in rural areas, demonstrating the ongoing need to address the mutually constitutive problems of violent repression and criminalization.  In addition to these cases, there have been multiple accusation made against Colombian security forces for the legal repression of activists protesting mining and other extractive industries.

[1] The term estado de sitio, or state of siege, used in Colombia and throughout Latin America, is derived from French revolutionary law.  The term was first used in a decree of the French Constituent Assembly in 1791 granting civilian political authority to the military.  In Anglo-Saxon law the preferred terms are state of emergency or martial law.  I use the Colombian term estado de sitio.  Giorgio Agamben, States of Exception (Chicago: the University of Chicago Press, 2005), 4-5.